Our typical Seychelles is filled with injustice and inequality but we are sometimes to blind to see it. The root of these injustice is often born out of bribery, jealousy and political victimization.

The machines or tools that makes this work has switched gears since the so called (15 lo 10) now there is more selective prosecution by state and equally a new style of policing by state forces for each and every class of seychellois or seychelloise.

Note that i used the word "class"; in fact class still exist in our little Seychelles and those who knows are targeted by ....... and in all sort's of manner.

A perfect example would be me; yes myself MR. Jean-Paul Isaac.

I recently came to the know that at the Mont Fleuri Police Station there is a summons for me to appear in the magistrate court in town over none payment of a Fixed Penalty issued by the Republic for and on behalf of the Seychelles police force precisely the traffic unit against me. 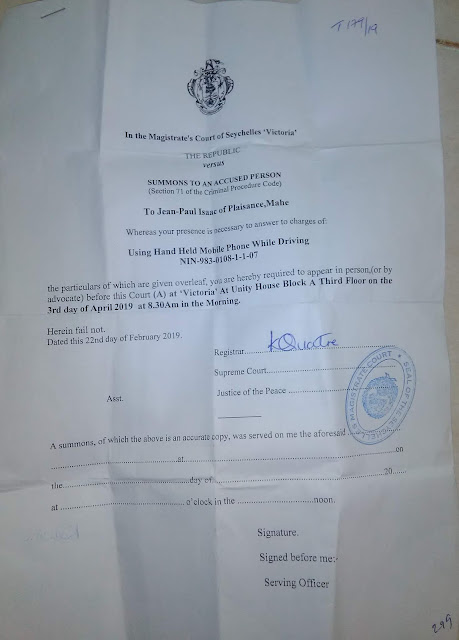 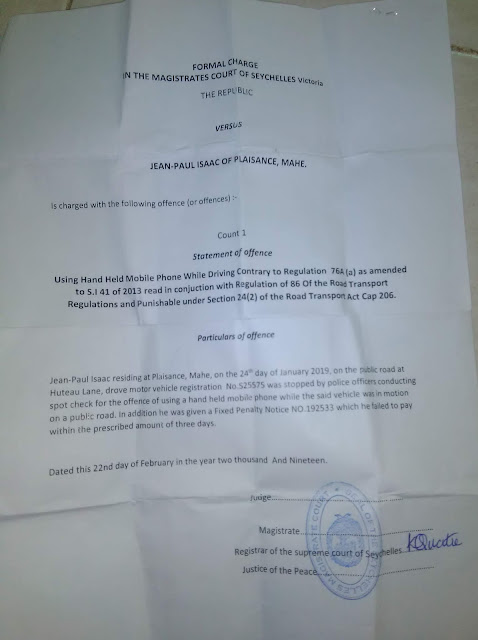 The above as i had mention is the full snapshots of the summons that was served onto me at the Mont fleuri police station last week.

As from today and to my knowledge there have been many issued traffic violation tickets but thus far most are yet to be summoned or prosecuted to that effect. So you can imagine to my surprise as to why over such short notice i have been bumped up the prosecution ladder? Why me?

The money question is how does one get to find this out?

Many are now wondering why i am saying malice or neglect duty!

So see below for a snapshot of a receipt for the above charges and  fixed penalty paid at the Seychelles supreme court by me on the same day it was issued by a w/pc under the guidance of one SGT Emile Fred. 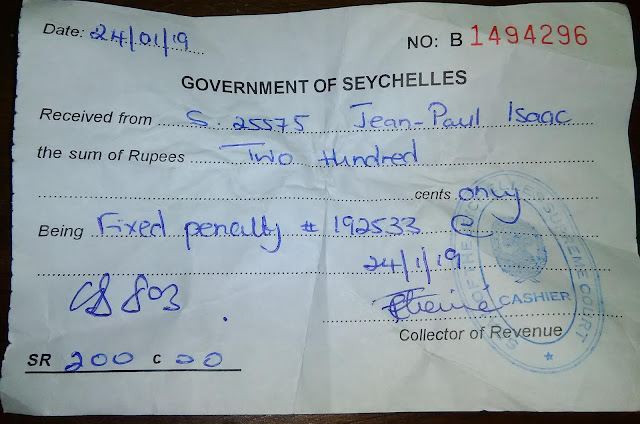 If anyone reading this would refer to the date of the payment, the vehicle registration and the reference number of the fixed penalty i paid; you would see that there is no reason as to why i should be summoned to the courts.

Anyway this happens a lot in Seychelles. It is not the first time and it would not be the last. Whether this is malice action over articles i may have written on officers miss conduct that led to his or her disciplinary action past or present or be it a politically motivated move, it is safe to say that the police force has failed to do their duty.


What is Redress for the victim in this case?


Well your redress is close to none. I say this because state authority/entity negligence here in Seychelles is highly tolerated and rewarded while we the people we are highly penalized and condemn.


Why write this article?


Well as a champion advocate of human right's both locally and internationally this wrong has to be exposed. I am lucky i kept my receipt but for those who did not?

Most Seychellois does not know the law and the course of redress under the laws of Seychelles. In many instances people tends to trust the law enforcer's to do it's due diligence meanwhile failing to note that the law upholders are also imperfect or subjected to corrupt practices.

For any other person/s they would have paid their fine, trust the system records and throw away the receipt. When or if they are summoned their would be no receipt to show cause or proof for them.

So two things would have happened:

Both very inconvenient.
This can all happen even if you are in the right and the law is in omission. So who champions the cause and alerts the people when such actions by state operators takes place? Well this is where i come in today. Others should follow in my footsteps.

Your course of redress and cost

If you are not well versed with the laws of Seychelles you must have an attorney present which more or less will cost you more than the fine the magistrate court will sentence you for over lack of proof or payment receipt.

Another is if someone is kind enough to advise you that if you've paid the fine, you can go to the supreme court account's Cashier for a log search in their payment book, where upon confirmation or proof of payment a letter by the same department will be given to you to present to the court's to that effect. Whether there is a cost for the search & letter, just know you are still paying for state forces mistake.

It is unfair to be made to fork over hard earned cash over the state forces failing to do their job.

Note you will have to leave work to attend court, you will have to provide further expanse for the transportation to the courts dependent on the distance you're travelling from. Another is if you fail to attend court despite being in the right their will be an issued warrant of arrest for you and you will be jailed and brought to court in cuffs.

So can we seek damages for such negligence of duty from the state? In this case the police force!

Yes! but it will cost you a bit. So can the magistrate rule that the police compensate you for your troubles over their negligence? Well Yes, but they will rarely side with the people over this.

At most you can simply write to the commissioner of police and demand an explanation from an internal investigation as to how such neglect duty took place. Then use the report to file for damages.

God Bless all Freedom Loving Seychellois & Everyone around the world

Hi, yes its real just got my blank atm card,from MR GEORGE. he is really good at

what he is doing. met some people but they ran away with my money but mr george

sent me the card two days ago through courier service in my country. The card

free online purchases of any kind. The application process is so simple, i have

tried mine with the closest ATM machine close to me, to my greatest surprise It

worked like magic. I was able to withdraw up to $3000 daily, i dont have to worry

about getting a loan anymore.This ATM has really change my life. If you want to

Hello everyone, really dreams do come through, i no longer have to apply for loans and worry over my bad credit scores, i got my blank ATM card after so many trails all thanks to Mr George, if you are thinking if its actually real the answer is YES. Mr George is very good at his job i applied for the card and got it shipped to my country 5 days later and i have been using the card for two months, withdrawn a total of €30000 its totally untraceable, my life has transformed from paring an apartment in the slums to purchasing an executive condo with luxury furniture's and now my children can now attend quality schools, Mr George is an angel sent from God to the poor and needy. i am writing this with tears of joy as Mr George has removed my family from the life of want to the life of satisfaction and i have enough money saved up for Christmas. you can contact him through this email: blankatm402@gmail.com

Here is how it all works...

So, do you want to start making money???

You can test-drive the system for yourself risk free...